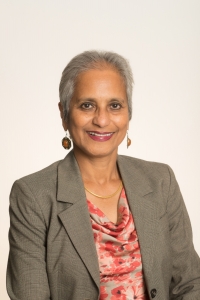 Deepa Ollapally is a political scientist specializing in Indian foreign policy, India-China relations, and Asian regional and maritime security. She is Research Professor of International Affairs and the Associate Director of the Sigur Center. She also directs the Rising Powers Initiative, a major research program that tracks and analyzes foreign policy debates in aspiring powers of Asia and Eurasia.

Dr. Ollapally is currently working on a funded book, Big Power Competition for Influence in the Indian Ocean Region, which assesses the shifting patterns of geopolitical influence by major powers in the region since 2005 and the drivers of these changes. She is the author of five books including Worldviews of Aspiring Powers (Oxford, 2012) and The Politics of Extremism in South Asia (Cambridge, 2008). Her most recent books are two edited volumes, Energy Security in Asia and Eurasia (Routledge, 2017), and Nuclear Debates in Asia: The Role of Geopolitics and Domestic Processes (Rowman & Littlefield, 2016).

Dr. Ollapally has received grants from the Carnegie Corporation, MacArthur Foundation, Smith Richardson Foundation, Ford Foundation, the Rockefeller Foundation, and the Asia Foundation for projects related to India and Asia. Previously, she was Associate Professor at Swarthmore College and has been a Visiting Professor at Kings College, London and at Columbia University. Dr. Ollapally also held senior positions in the policy world including the US Institute of Peace, Washington DC and the National Institute of Advanced Studies, Bangalore, India. She is a frequent commentator in the media, including appearances on CNN, BBC, CBS, Diane Rehm Show and Reuters TV. She holds a Ph.D. in Political Science from Columbia University.