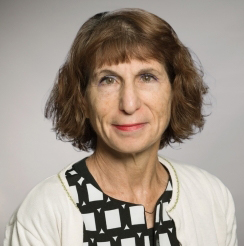 Susan Ariel Aaronson is a research professor of international affairs and director of the Digital Trade and Data Governance Hub. Aaronson conceived of and directs the Hub. Since 2019, the Hub educate policymakers, the press and the public about data governance and data driven change. In that regard, the Hub hosts conferences, monthly webinars, study groups, and creates primers, and video primers  as well as scholarly papers. The Hub is also the only organization in the world that maps the governance of public, proprietary, and personal data at the domestic and international levels. The Hub’s research has been funded by foundations such as Ford and Minderoo.

Aaronson is currently directing projects on mapping data governance and writing on AI Protectionism, Public Participation in AI Governance,  XR and International Trade, and data as a global public good.

Dr. Aaronson is a frequent speaker and writer on international economic developments. She regularly writes op eds for Barron’s.  Aaronson has commented on economics on "Marketplace,  "All Things Considered," Morning Edition," NBC, CNN, the BBC, and PBS.  Previously, Aaronson was a Guest Scholar in Economics at the Brookings Institution (1995–1999); and a Research Fellow at the World Trade Institute 2008-2012. . Aaronson was also the Carvalho Fellow at the Government Accountability Project and the Minerva Chair at the National War College.  She has served on the Business and Human Rights Advisory Board at Amnesty International and the Advisory Board of Human Rights Under Pressure, a joint German and Israeli initiative on human rights.

Aaronson encouraged GWU to join the  Public Interest Technology Network and as the designated representative, she works to encourage education and research that facilitates public understanding of technology and technology that serves the public.  She has also consulted for the ILO; the World Bank; Free the Slaves; the Ford Foundation; the Extractive Industries Transparency Initiative; the Progressive Policy Institute the Stanley Foundation; several corporations; and the governments of Canada, Belgium, and the Netherlands, among others.

In her spare time, Aaronson enjoys triathlons and ballet.

HIST 6031 History of International Economic Systems: the WTO and the Bretton Woods Institutions

Building trust in digital trade will require a rethink of Trade policy-making, Oxford Review of Economic Policy  Dec, 2022  Vol 38, No. 4.

Data is Different and that’s Why the world Needs a new Approach to Governing Cross-Border Data Flows, Digital Policy, Regulation and Governance, May 2019.

What Are We Talking About When We Discuss Digital Protectionism?, World Trade Review: 2018 (Winter)

Listening to Users and Other Ideas for Building Trust in Digital Trade, CIGI Paper No. 258, September 21, 2021.

Data is Dangerous: Comparing the Risks that the United States, Canada and Germany See in Data Troves, CIGI Papers No. 241, April 2020.