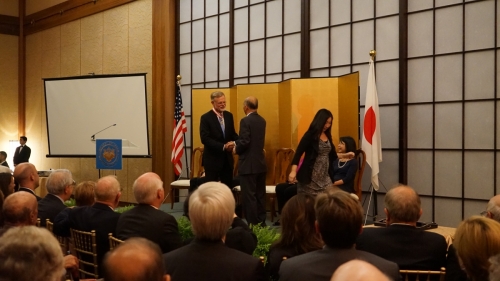 WASHINGTON, DC – The Japanese Order of the Rising Sun was recently conferred upon Professor Henry Nau by the Japanese Ambassador Extraordinary and Plenipotentiary of Japan to the United States, Kenichiro Sasae. Nau was recognized for promoting legislative exchange and mutual understanding between the United States and Japan through the US-Japan Legislative Exchange Program. An expert on US foreign policy and international politics, Nau has been a central figure in the program. He spearheaded the first US-Japan legislative exchange in 1989 and has served as the program’s co-director for nearly three decades. Now in its 27th year, the program has brought together more than 300 Japanese Diet members and US Members of Congress.

Professor Nau started his teaching career at Williams College in Massachusetts. After obtaining his undergraduate degree in the sciences from MIT, he was offered a position in the Science, Technology, and Public Policy Program at GW. Nau returned to graduate school to study international affairs and,  soon after graduating, wrote his first book, National Politics and International Technology.  Nau worked at the US State Department in the late 1970s as undersecretary for economic affairs and went on to become assistant secretary for science, oceans, and environment. He came to GW largely because it was one of the few universities at the time with a program dedicated to science, technology, and public policy. Despite his extensive resume in government and policy, Nau insists, “The University is my home and it [GW] has only continued to improve.”

Nau became involved in the US-Japan relationship after he came out of government in the mid-1980s. He was concerned about the growing bitterness affecting relations between the two countries. Congress was condemning Toshiba, angry about increasing imports from Japan, and alarmed about job losses in the United States. Convinced that bilateral trade relations were mutually beneficial, Nau and his counterparts “wanted to start something that would focus more attention on the broader interests of the United States and Japan, including the security interests.” Nau and his colleagues conceived of an initiative they dubbed the “1985 US-Japan Economic Agenda.” This became the umbrella organization for the Legislative Exchange Program. At the time, the US Congress did not have a large number of personal contacts in Japan as they did in other areas of the world. In addition, the language barrier was significant between the two countries – hence the growing need for the legislative exchange program.

The program sponsored visits to congressional districts in the United States for Japanese Diet members. Likewise, their American counterparts would travel to Japan, visiting regional prefectures in order to get an idea of how local Japanese politics works. Living in a formal and insulated society, Japanese members were not accustomed to personal contact with foreigners. Yet they wanted to break down legislative barriers between the United States and Japan.

The exchange program expanded to include South Korea roughly 13 years after its start, on the suggestion of the Japanese. Nau recalls, “it was a really big moment in the exchange, when the Japanese felt that we had succeeded so well in developing understanding between the US members and the Japanese members, ‘why don’t we try the same thing with the South Koreans’… it was very satisfying.”

With US Congress members present, the Americans served as a buffer for sensitive and at times tense conversations between Japan and South Korea. Discussions included topics such as WWII, Japanese behavior in Korea during the occupation from 1905-1945, the treatment of women during the war, conflicts over the disputed sovereignty of islands, and concerns about the way Japanese celebrate their war heroes. Nau recalled, “We had some really good but tough conversations and then at the same time we would all go out to dinner and enjoy each other’s company, tell jokes, and be civil about the disagreements.”

Nau describes what an advantage it was to be based in the university community. “By virtue of being here at GW, we were not considered part of the lobbying world and were considered not to be partisan… we were able then to put the focus on the issues.”