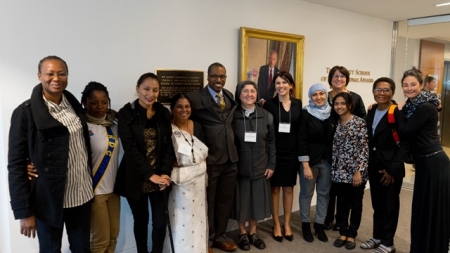 The room was hushed, except for the murmur of translators whispering into microphones as one by one, ten women of courage from around the world told their stories of overcoming oppression, humiliation and violence. Each story was unique. Each woman was inspired by her experience to help others to fight for justice and freedom. Each had persisted in the face of daunting odds.
Representing some of the most remote corners of the world, the women, all recipients of the 2017 International Women of Courage Awards, spoke at the Elliott School on March 30 to a standing-room only crowd at an event hosted by the Elliott School, the GW Global Women’s Institute and the US Department of State, which confers the awards.
Fadia Najib Thabet spoke of her work to dissuade young boys from joining Al Qaeda. She is often told, “This is not what women are meant to do.” Veronica Simogun of Papua, New Guinea, has faced death threats in her work to protect women from gender-based violence. Rebecca Kabugho,an advocate for credible elections in the Democratic Republic of Congo, was 22 when she was imprisoned for helping to plan a peaceful demonstration.
Despite the horrifying circumstances many of the awardees have endured or witnessed, the mood in the room was upbeat, inspirational and infectious. One member of the audience asked, “Did you know you had the courage in you to accomplish all that you have?” No, they all agreed, not until they were tested. “Courage is contagious,” said Rebecca Kabugho. “Men can’t bring change on their own.They need women’s participation,” said Fadia Thabet.
Common themes emerged as the honorees marveled at how a group so geographically and linguistically diverse could have so much in common. Courage, determination, resilience and stubbornness, they agreed laughingly, were traits they shared.
The women also shared a focus on a positive future and the conviction that their work will make a difference. Natalia Ponce de León of Colombia, a victim of an acid attack who now advocates on behalf of burn victims, explained how she found a way to channel brutal experience into positive action. “The way I was able to be happy again was to forgive my attacker. Hate is such a crushing force. We cannot carry hate in our hearts, for if we do we cannot evolve.”
The Women of Courage awards recognize women around the globe who have demonstrated exceptional courage and leadership in advocating for peace, justice, human rights, gender equality and women’s empowerment, often at great personal risk. Since 2007, the State Department has honored over 100 women from more than 60 different countries.
See the full biographies of the award winners here.
Photos from the event can be viewed here.