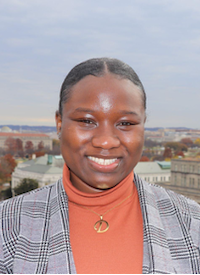 Adedasola Adeniyi is pursuing a Bachelor of Arts in International Affairs, with a concentration in International Development and a minor in Economics. At GWU, she is the co-founder of the GW African Development Initiative and worked as an Economics Learning Assistant. She has interned with the Office of Africa, Global Markets at the International Trade Administration. She has worked with development programs in Africa through HYBR, Doing Good Work in Africa (DOWA), and Nigerians in Diaspora Commission (NiDCOM).

Alex DiCenso is pursuing a Bachelor of Arts in International Affairs with a concentration in Security Policy. His research for the Dean’s Scholars Program examined the use of Twitter by organized crime in Brazil. 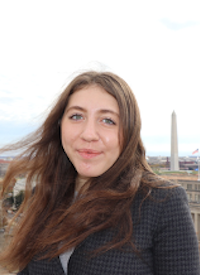 Alyssa Edelheit is pursuing a Bachelor of Arts in International Affairs with a concentration in Conflict Resolution and a minor in Spanish Language and Culture. Her Dean’s Scholars project seeks to understand the impact a university setting has on a Mapuche student organization in Santiago, Chile.

Outside of the classroom, Alyssa is the director of internal affairs at The Store, a student-run food pantry fighting food insecurity on GW’s campus. Outside of GW, she is an Education and Impact intern at the National Museum of American History and teaches first grade Hebrew school classes at a local DC synagogue. 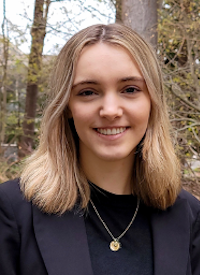 Anneliese Raynolds is pursuing a major in international affairs with a concentration in international development and a minor in political science. Her interest in East Asia and the impact education systems have on their societies has led her to incorporate both fields into her research. Her research is focused on the controversy surrounding Japan’s history with its neighboring nations, concentrating on its relations with the United States and China. The aim of the project is to understand how Japan’s history education shapes Japanese youths’ views of the United States and China.

In addition to her research project, Anneliese is the Director of Alumni Relations for the Dean’s Scholars Journal. Outside of Dean’s Scholars, she was a legislative intern for a United States Senator serving on the Senate Foreign Relations committee. At GW, she is actively involved in Phi Alpha Delta, the professional Pre-Law Fraternity, and plays on GW’s Women’s Ultimate Frisbee club team. During the 2022 Spring semester, Anneliese studied abroad at the National University of Singapore. 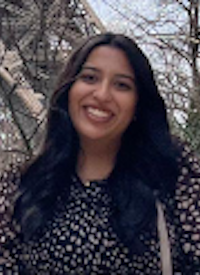 Arzina Lakhani is pursuing a dual degree in Public Health and International Affairs, with a concentration in International Development. Her Dean’s Scholars project is focused on the intersection of climate change and migration within Hyderabad, India and the role of the Indian government in mitigating these effects. Arzina has interned with The American Civil Liberties Union, NARAL Pro-Choice Missouri, Doha Debates, and several political campaigns.

At GW, Arzina is actively involved in the South Asian Society as the Development and Public Relations Chair, First Generation United as the Director of Engagement, GlobeMed, and No Lost Generation. Furthermore, she is actively involved in Student Life at GW through New Student Orientation and the Mount Vernon Campus Programming Assistant. During Spring 2022, Arzina will be studying abroad at King's College London where she will be a part of the Health and Society program. 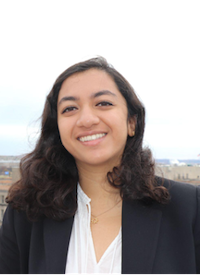 Krithi Sriram is pursuing a Bachelor of Arts in International Affairs, with a concentration in Conflict Resolution and minors in Arabic and Women’s, Gender and Sexuality Studies. Her Dean’s Scholars project seeks to analyze the experiences of Jordanian women employed by their Embassy in the United States and the socio-cultural impacts of the exposure to Western ideals surrounding feminism that they receive during their professional careers. Krithi has interned at the Embassy of Jordan and also pursues many independent activist projects centered around human rights and conflict prevention.

Outside of the classroom, Krithi is the co-captain member of GW Raas, a highly ranked Indian folk dance team that has performed and gained acclamation across the United States. She is also involved in Sigma Iota Rho, the Elliott School’s gender-inclusive Honor Society, and serves as the COO of Browngirloncampus, an online publication aimed at helping South Asian women navigate their college experiences. She has written many articles for the magazine centered around a variety of topics, including politics, LGBTQ+ rights, voting, and racial activism. 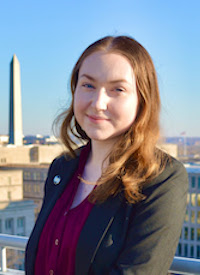 Meghan Sullivan is pursuing a Bachelor of Arts in International Affairs, with concentrations in International Development and Comparative Political, Economic, and Social Systems. Her Dean’s Scholars research focuses on international-local aid partnerships in the response to humanitarian needs along the Thai-Southeast Myanmar border. More broadly, her research interests center around Southeast Asia and the governance of international development and humanitarian assistance. Meghan has interned for the Governance Studies program at Brookings and the Southeast Asia Program at CSIS. On campus, she is a member of Delta Phi Epsilon Professional Foreign Service Sorority. 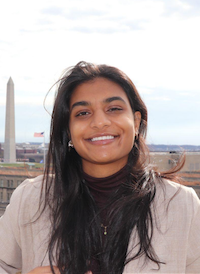 Prajna Naidoo is pursuing a Bachelor of Arts in International Affairs with a concentration in International Development and a minor in Psychology. Her research interests focus on understanding small business development strategies for migrants and refugees in Cape Town, South Africa. Through her professional experiences working for a migrant support non-profit in Cape Town, she provided mentorship around business development and digital literacy skills building to inform the program’s curriculum as well as her Dean’s Scholars research. She hopes to build on these experiences throughout her International Development career to find sustainable solutions that remove employment barriers for marginalized groups around the globe.

Outside of her research, Prajna is the president of One For The World GW which encourages students to donate 1% of their future incomes toward the world’s most cost-effective charities. The organization performs rigorous research on global charities and provides a reliable platform for students and young professionals to manage their charitable donations. It operates in an attempt to rebuild donors’ trust in charitable organizations by remaining transparent and independent from political agendas. 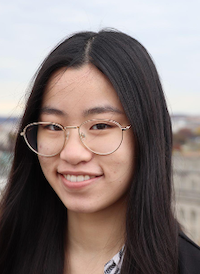 Samantha Lewis is pursuing a major in Asian Studies with a double minor in Chinese and History. Her research focuses on the intergenerational support and parent-care within Chinese diaspora families living in the United States. In the future, she hopes to continue her research in graduate school and pursue a career in academia.

Samantha has previously worked as a Journalism Intern at Children and Screens and is currently a member of the Dean’s Journal Team as the co-Editor in Chief and Director of Web Design. On campus, she works as a Communications Chair for First Generation United. 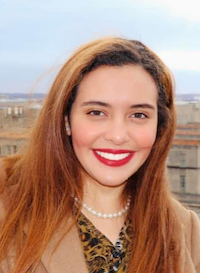 Semon Makar Zekry is pursuing a Bachelor of Science in International Affairs with a focus on International Economics, International Development, and the Middle East. Her studies also include a double major in Economics with minors in public health and statistics. Semon's Dean's Scholars research project was inspired by her interest in the impact of religious law in the Middle East on development and minority rights, specifically regarding the intersection of Coptic minority rights and Egyptian law.

Semon seeks to apply her extensive hands-on experience in the US government and various IGO’s throughout her research project. Semon was recently an intern at the United States Agency for International Development (USAID), where she drafted a high-level report and created a presentation highlighting the various benefits of digital development for women in East Africa. Given her passion for advancing human rights, she spent her sophomore year assisting American Justices at the Department of Justice (DOJ), HRSP section with critical cases against human rights violators and other international criminals in the Middle East, Asia, Africa, and Latin America. Semon also interned with the United States Commission on Security and Cooperation in Europe (CSCE) and at the United Nations in New York, where she conducted a research paper on immigration reform and proposed solutions to the US-Mexico border crisis. She previously worked in both chambers of the United States Congress, where she wrote co-sponsor memos and legislative recommendations as well as policy memos on foreign affairs, education, and labor.

Her interest in global trade and international economics landed her a summer internship with JPMorgan in the Corporate & Investment Bank in 2021. Semon also worked as a Capital Planning Assistant at the World Trade Center, where she assisted with executive-level reports on the 2017-2026 Capital Plan Programs.

Semon is also a 2019 New Jersey Hall Of Fame Aretê Scholar Inductee who worked for the State of New Jersey during the COVID-19 pandemic, writing policy memos and funding recommendations for programs that promote education affordability and accessibility in NJ. During the 2022 Spring semester, Semon will be studying abroad at the American University of Sharjah in the UAE where she will focus on her international economics concentration. 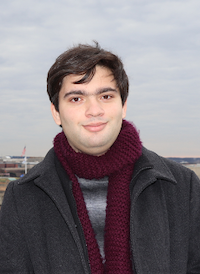 Thelonious Rider is pursuing a double major with a Bachelor of Arts in International Affairs and Anthropology. For International Affairs, he is doing a concentration in conflict resolution and development. His Dean’s Scholars project will be looking at how depictions of the 1947 Partition, as modalities of knowledge production, have influenced collective consciousness surrounding peacebuilding dialogues in India. He has previously interned with Congressman Joe Neguse. On campus, he is a member of Sigma Iota Rho, and is active with several other campus organizations. 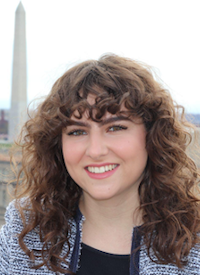 Victoria Freire is studying International Affairs and History with a concentration in Latin America. Her primary academic interest is Latin American Cold War History, and she is particularly interested in declassification diplomacy, intelligence, and guerrilla warfare. Her Dean’s Scholars research project investigates Operation Condor and the extent to which the U.S. government aided the Argentine military junta during the Dirty War.

Outside of her studies, Victoria is actively involved in environmental advocacy work, particularly with Sunrise Movement, which aims to to stop climate change and create millions of good-paying jobs in the process. Alongside Sunrise, she helped successfully push the university to divest their endowment from fossil fuels and commit to carbon neutrality by 2030. She also conducts research surrounding fossil fuel funding in academia alongside organizations and think tanks such as Common Good Generation, Fossil Free Research and Data For Progress. 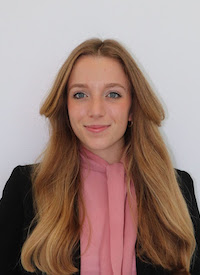 Vivi Mehren is a senior pursuing a Bachelor of Arts in international affairs with a concentration in international economics and minors in economics and French at the George Washington University Elliott School of International Affairs. Vivi holds a strong interest in global governance and international law, particularly regarding their interplay with novel technologies such as cyberspace. As a researcher with the Elliott School Dean's Scholars Undergraduate Research Program, she conducts comparative research between the EU and US on how their different cyber governance regimes affect public opinion on data privacy. In addition to her research project, Victoria leads outdoor adventures for students as a GW TRAILS guide and is an active member of the Delta Phi Epsilon professional foreign service sorority and the Phi Alpha Delta professional Pre-Law Fraternity.